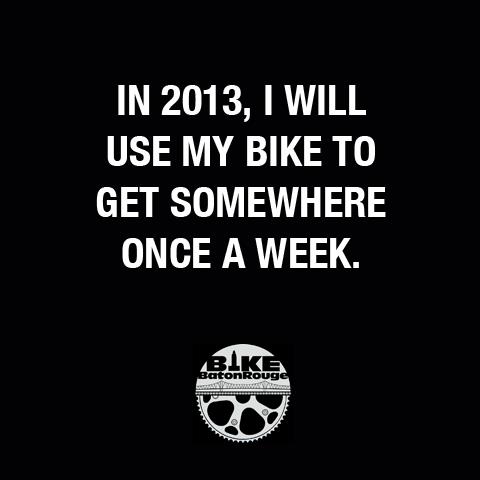 Bike Baton Rouge posted a picture in Facebook on New Year's Eve (2012). The picture suggested a new year's resolution of biking once a week to get somewhere. The idea seemed to be to replace a car trip with a bike trip. I figured once a week was easy, so I decided to make it my resolution and to log my trips to make sure I'm following through with it.

This meant collecting data, so I thought I'd include some additional information beyond the yes/no of taking a trip in a certain week. Total miles, temperature, destination, and what I locked up to ("parking"). I also calculated how many gallons of gas I saved by not driving my Prius.

In the first month, I noticed I didn't really go to places close enough to realistically replace a car trip with a bike trip once per week. Grocery shopping is a once-per-week activity, but I didn't have bike cargo room. But it was great news when, in early February, my work location moved closer to home. Then I could bike every weekday. At some point, I started using a mobile app to track my miles. It was rather inaccurate, but the errors should average out over the time I did use it.

I think a step line graph is in order. Weekends are greyed.

One thing to realize in the following table is that "gas saved" assumes I would have driven my car the same distance as I biked. This is likely not entirely accurate as there tends to be more driving around to find parking whereas locking up a bike can be done near business entrances. But with trips on this small scale, this is pretty negligible. The biggest difference is probably that biking has caused me to visit local places more than I would have if I drove.