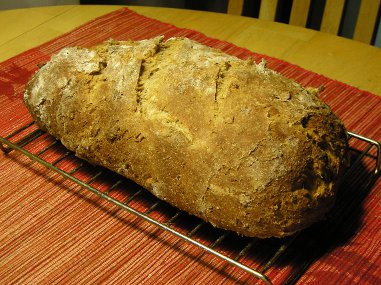 When this bread blog thing occurred to me this morning, I wished I had started sooner. Oh, well. But I still have a ways to go to make bread come out the way I think it should be coming out.

Before going in to where I started, let me say where I am. I currently have about 2 pounds of dough sitting on the kitchen counter, gently resting/rising before I plop it on a baking stone in the oven. The baking stone is warming up to a blistering 450°F. It's on a rack that's kinda in the middle, vertically.

Because I don't have an official "pizza peel" -- I'm not sure why it's called that -- my dough is on a wood cutting board that I coated with corn meal that I bought at Albertson's. The dough is a mixture of whole wheat flour and oatmeal. I wanted something like a 2:1 ratio, mostly whole wheat, but it turned into a 2.625:1 ratio: the dough seemed too wet as I was mixing, so I kept adding whole wheat flour.

Now to back way up, since this is my first post. I can't remember when I first wanted to bake bread, what prompted me to buy yeast and flour. It was some time during the 2 years I lived in Spanish Town, the years 2005 to 2007. I wanted to make pure whole wheat bread instead of the partial whole wheat bread I kept seeing in stores. And something without high fructose corn syrup.

I found a whole wheat recipe online somewhere. I didn't have either wheat gluten or dough conditioner, both of which were in the recipe. Otherwise, I followed exactly. More or less. I can't remember what I did, but each time I tried to make it, it came out a yeast brick. Tasted like crap. I ended up throwing it out. I only tried it twice or so, and it was a while before I tried baking bread again.

At some point, I started to pick up baking my own pizza crusts. (Mid-2008?) I think I figured it wasn't so important for it to rise, so it was allowed to be a brick. I had the opposite problem: they were turning out too thick and bread-like. I found a recipe that was half all-purpose and half whole wheat. The final tweaking brought it to 1 1/3 cups of whole wheat and 1 cup of all-purpose. It was very simple but tasted really good. Sometimes I would add chopped raw garlic to the dough. Maybe some fresh basil.

Things were going well, so at one point last year, I guess, I tried my hand at bread again. Chances are it was a whole wheat recipe. I'm thinking it was a whole wheat/oatmeal mix. I had bought some Bob's Red Mill Vital Wheat Gluten Flour at one point in early 2008. I still have it in the fridge. The expiration on the package is June 20, 2008. I didn't use it for a LONG time. I read up on gluten and kneading. Then I gave bread another shot. (I'm totally reconstructing this story because I have no memory of this.) So let's just say that I got a bread pan from my mom and found a recipe for a mixed whole wheat and oatmeal bread. That's just as likely as anything.

The bread was coming out really well. I read more about rye flour and found a recipe for rye bread for Christmas. Really, it's an American pumpernickel as it mimics the German style by using cocoa and molasses. I made a loaf for each set of parents. Turned out well, but it left a strange film on the roof of my mouth.

The next step came from the Christmas presents I received: a bread book Rikki bought for me (Artisan Bread in Five Minutes a Day) and a baking stone from Rikki's mom. Again, I can't remember what I did first. Probably their 100% whole wheat recipe. I also tried their European peasant bread and deli-style rye. Recently, I made spelt bread and Italian semolina. Though I can't remember where that spelt recipe came from. Hmm... I'll need to figure that out as I want to make it again. Spelt is maybe my favorite so far.

This bad recap now brings me to the bread I just pulled out of the oven, the whole wheat and oatmeal blend. I was trying something new. I baked it at 450°F for about 15 minutes then turned the heat down to 350°F. I set the oven timer to 30 minutes for the lower temp so I could check on it. When I looked, I was surprised to see that it was more or less done. Weird. The original recipe says it could take up to an hour. No idea what happened there. I think it's maybe because this was the second batch from the initial mound of dough. It sat in the fridge and must have dried out.

The concept of the book is that you make a wetter dough, and a lot of it. It sits in the fridge for up to 2 weeks. You tear off bits of it as you need it and bake them. I have been making the full recipe, which is for about 3 loaves, but I split it in half for baking 2 loaves. The first loaf always comes out wetter while the second loaf comes out with a more sour taste, kinda like Cheez-Its. I blame having to use plastic wrap to cover the bowl of dough when it's sitting in the fridge: not the best way to hold moisture in.

I hope to continue this little blog, covering more of the bread recipes themselves, what I did differently, and what I figure out is important to make that really good crust and crumb.