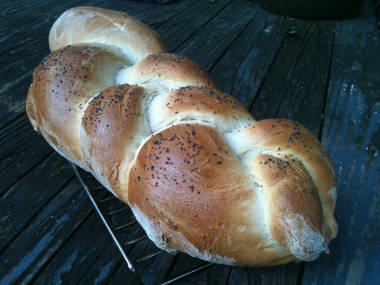 With the pumpernickel under my belt, challah was next up. I had a clipping from a December 2009 Cooking Light. It looked pretty good and uses bread flour, which I'm trying to get rid of now that I'm in the process of switching to whole white wheat from all-purpose flour and bread flour.

Follow the above link to see the original recipe. Here, I'll list the ingredients (and amounts) I ended up using.

I followed the directions exactly except when it came to kneading on a "lightly floured surface" (a cutting board, in my case). The original recipe says there will be a total of 3 cups of flour. I was kneading and sticky dough was all over my hands, in between my fingers. I had added the full 3 cups and decided to add some more to get the dough under control. I ended up with somewhere around 4 cups. I wonder now if some these recipes I find are made for people in low humidity kitchens. I mean, I had to add 33% more flour. That's a lot.

I like how the bread actually looks like something from a bakery. It's light, fluffy, pretty tasty. What I don't like about it is that it tastes like something from a bakery. It's cool to finally make a white bread, but it's not something I like to eat. It's too low in fiber and very easy to blow through without thinking about it. It's cotton candy bread. I'm considering trying this again later with whole white wheat to see what happens. I expect it to be denser, of course, but maybe I'll like it more.