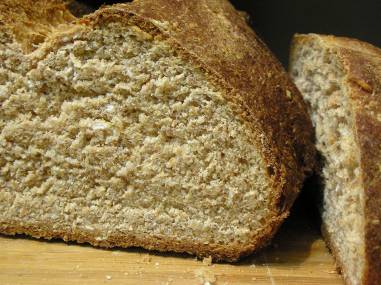 After I made the focaccia (E series), I knew I needed to make some daily bread (D series), but I didn't have much all-purpose flour left over. I figured I could make use of my semolina flour and the whole wheat flour somehow. I took out my old bag of gluten flour to make up for the lower gluten and noticed a recipe on the back for honey-oatmeal bread. I thought I'd give it a shot. (I cut the recipe in half to make one loaf.)

Oddly, it's only half the amount of oats that I normally use in my loaves.

Well, here's the process with this one. Dump flours and oats in a large bowl. I heated the milk, honey, and oil in the microwave until warm. I added the yeast and salt to it then poured that into the large bowl. I stirred a bit to get the mix going. Then I mixed it and kneaded it by hand. Must have been 10 minutes of kneading. I think I poured a touch of more oil on the dough ball to coat it. Put a towel on the bowl and let it rise for 2 hours or so.

I coated my pizza peel with some corn meal, punched the dough down and formed it into a long loaf and put it on the pizza peel. I went ahead and put a towel back on top and let it ride for something like 30 minutes, while preheating the oven to 375°F. I popped it in on the baking stone and baked for, I'm thinking, a mere 30 minutes because it was starting to smell burnt. (Oh, I had a bread pan of water next to it on the stone.) I took it out and let it cool on a wire rack. The crust looked kinda burnt and smelly.

However, when I later cut it and ate it: mmm. The honey is very prominent. It's so sweet and light. Must be the magic of milk. It's an excellent bread. I highly recommend it.