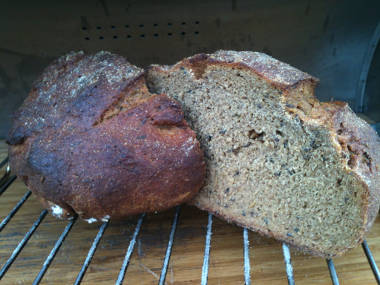 The molasses spree continues. Actually, I wanted to play around with potato flour some more, too. What better way to do both than combine them with some rye flour and caraway? I've been putting potato flour in my pizza dough with a bunch of other things, and it's been going well. During mixing, it starts to look like mashed potatoes until I add other things, but it always ends well. Here are the complete ingredients:

As usual, I only add most of the flour, the salt, and the oil on Day 2. Day 1 is water, yeast, sugar things (molasses), and some flour. I want wild yeast to jump on in with my store-bought yeast which is why it's a two-day affair. I went crazy this time and added caraway in on Day 1. I don't think that was a good idea. It distributed the taste too much. It's hard to describe. I should only add it on Day 2. I also think molasses was a bad call. I'll leave it out next time to see how it goes.

I did some basic math and reasoned I needed just a little more salt than 1.5 tsp, my usual. Salt, to a point, makes bread less bland. When I bake, the only things I measure are water, yeast, and salt. With an overnight rise, the amount of yeast isn't even that important. But the water and salt should be in good proportion to each other. As for flour, I just add it until it looks and feels right.

Read other posts for cooking method. Nothing new there. The potato flour seems to suck up water a lot more than grain flour, so the bread ended up being smaller. That would explain why it started to darken sooner than expected. (I think.) In any case, it isn't burned, but the taste is a bit weird. Still tasty, of course.