Now that I've got one full year of serious plant selection and planting complete, I figured it was time for the 1st Annual Growth Awards. Categories range from tall trees to annuals. Heights were measured on October 24, 2012, from ground to highest leaf or live leaf bud. Only plants that were planted before August 2012 were nominated. (To avoid taking over 30 pictures, only the winners are shown.)

I didn't plant many tall trees, opting for shorter trees that won't cause too much damage in a hurricane. Because of this, I dropped the range of "tall tree" down to include some trees which are usually regarded as "short". (The magnolia, live oak, crepe myrtles, and camphors are excluded from this category as they're already mature.)

Transplanted from a shady spot by the fence to the front yard, it has really taken to the increase in sunlight, doubling in height.
Red maple Current height: 3'2" (max: 60') Planted: 2011 December Free with an Arbor Day Foundation order, each red maple quickly established itself with a small crown of leaves.
Date palm Current height: 4'3" (max: 65') Planted: 2010 May Grown from seed and transplanted to a new site, this palm has lived a hard life. The main trunk appears to have died, but there are multiple suckers ready to take up the slack.
Parsley hawthorn Current height: 6'5" (max: 25') Planted: 2011 October Bought at a Baton Rouge Green tree sale, its leaves were thoroughly devoured by beetles in the Spring of 2012, stunting its growth.
Eastern redbud Current height: 0'4" (max: 30') Planted: 2011 October This redbud never quite got the hang of its new location. The main trunk has died back, and only suckers at the base are alive.

The plants in this category all had problems in 2012. 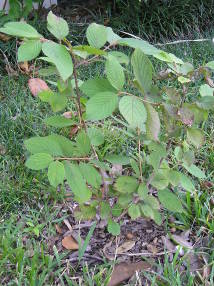 This is maybe my favorite category. Their flowers and leaves tend to interest me more, and they are more likely to reach maturity within my life time. 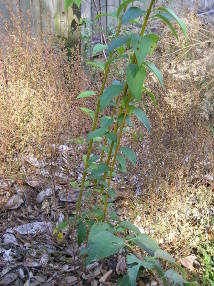 These are plants that live at least three years and which aren't counted as a tree or shrub. 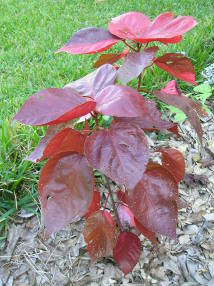 The brilliant red leaves rock, popping out from the green leaves that surround them.
Black-Eyed Susans Planted: 2012 March Sown from seed, these plants grew readily and produced fantastic flowers.
Day lilies Planted: 2012 January Initially spread out, these were moved to a bed where they could all be together. Months after the move, they were healthy enough to produce flowers.
Begonia Planted: 2012 June These were clippings that grew roots in a glass of water and which I later planted in a pot. A remarkably easy plant.
Asparagus fern Planted: [N/A] I didn't actually plant this fern: I discovered it in a pot left by the previous house residents. Over time, it sprouted multiple branches and even flowered, later creating bright red berries. It keeps its size and shape fairly constant.
Purple coneflower Planted: 2012 July While still alive, these didn't do so well once planted in full sun. Perhaps they'll do better next year.

I planted a fair number of annuals. Most failed miserably and didn't make the nomination process. 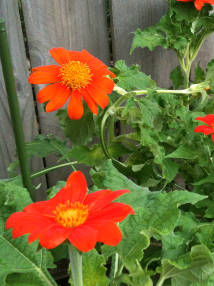 Also called Mexican sunflowers, these guys took off and exploded with bright orange flowers. A bumble bee favorite.
Blanket flowers Planted: 2012 March Sown from seed, it took a while for them to grow. But when they did, they partnered well with the other flowers.
Amaranth Planted: 2012 March While they have an interesting tassel-like flower, the weight of the flower got to be too much for the stalk. These would do best along a fence surrounded by plants with prettier, denser leaves.
Four o'clocks Planted: 2012 April Transplants from my brother's garden, they initially did well, growing the occasional flower. Once the sun started to shift in Fall, their leaves got smaller and less dark.
Dusty Millers Planted: 2011 October? These could be considered perennial as they survived the winter, but perhaps they should have just died. They never produced flowers or grew all that much.

Growing veggies in Summer tends to be difficult due to heat, humidity, and bugs. However, there are some plants that love these conditions. 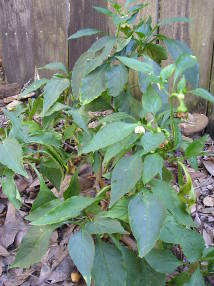 These guys love the heat as long as they get enough water. If you're lucky, you can leave a green pepper on and it'll ripen to a wonderful red.
Beans A sleeper hit, these plants produced and produced. And it all came from a single bean in a Whole Foods king cake in March 2011.
Basil Sprouted from last year's seeds, they had a hard time with the heat. Better mulching and watering would likely have helped them.
Butternut squash An unintended harvest: they sprouted in the compost pile and produced fruit from time to time.
Okra These were meant to grow tall and shade the other plants, but they never got as bushy as they did last year.
Cucumbers An utter disappointment, all 9 plants died after producing perhaps 4 fruit.
Eggplant Another disappointment, these three plants apparently had problems with wet roots. They might do better raised.

This is a competitive category since so much grows really well in the Winter. 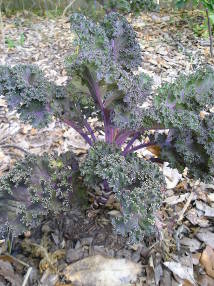 Once the temperature drops and bugs go dormant, the kale can grow and grow without being eaten up.
Celery Home-growing celery gives you wonderful dark green stalks.
Cilantro These exploded and nearly took over. After flowering, their dried seeds can be stored (coriander) or sown for the following Winter.
Chard These are great. So colorful and prolific.
Dill Never really grew all that bushy. Eaten by a caterpillar in the Spring.
Cabbage Sown too late in the season and eaten by bugs once it finally was growing.