It's time for the 2nd Annual Growth Awards. Categories have changed slightly since last year to match what I have learned about ecosystems this year. Heights were measured on December 31, 2013, from trunk base to highest leaf or live leaf bud.

Tall trees that generally grow above all others. 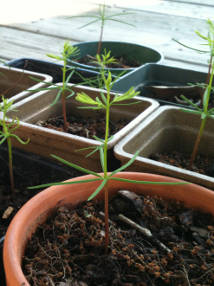 I grew a bunch of cypress from seed acquired by City Park Lake. Kept them in the fridge for 3 months, wrapped with a wet paper towel, and planted them in fluffy compost. The tallest grew 1'8" and is now in the ground. Because it grew that much in its first year from seed, it wins first place.
American sycamore Current height: 1'8" (max: 90') Planted: 2013 January I would say I grew this from seed, but it sort of grew itself. Some seeds escaped and landed in a flower bed where two trees began growing. I will be transplanting them to pots later this winter. The tallest of the two grew 1'8" (to the highest leaf bud).
Southern redcedar Current height: 5'8" (max: 40') Planted: 2011 October Not strictly a canopy tree, it does get taller than understory trees and requires full sun, so it's in this category. This is my current and future live Christmas tree. This year, I have a set of blue lights on it. It has grown 1'8" since last year's awards.
Date palm Current height: 5'3" (max: 65') Planted: 2010 May The main trunk has died and there are two main suckers growing strong. This may be the year when I introduce some pruning to keep the strongest one. In 2013, it grew 1'.
Red maple Current height: 3'5" (max: 60') Planted: 2011 December I have two from an Arbor Day Foundation order. I'm guessing they're busy growing roots because they haven't done a whole lot above the soil. The tallest grew 3". The shortest lost its main trunk and now has two strong offshoots. 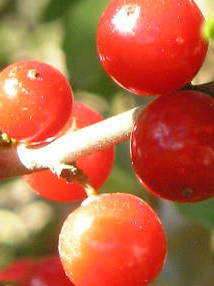 This is maybe my favorite category. Their flowers and leaves tend to interest me more, and they are more likely to reach maturity within my lifetime. 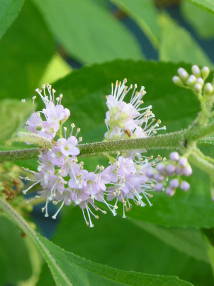 Only native perennials and annuals allowed. (And one that was supposed to be a native.) 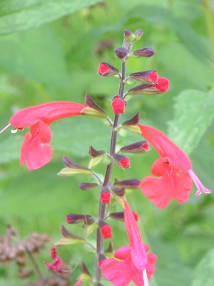 Here is a wildflower that grows up quickly and produces flowers the first year. Hummingbirds love them. Winner!
Partridge pea Planted: 2013 March This grows tall in one season and bumble bees love the flowers. Excellent plant for the soil.
Maximilian sunflower Planted: 2013 March Another excellent plant that grows tall in one season and whose flowers insects love.
Tropical milkweed Planted: 2013 May These were unexpected as I had ordered milkweeds native to Louisiana. In any case, I kept several and planted them. The monarchs love them.
Black-Eyed Susans These reseeded from last year. Or maybe the roots grew more shoots because I think they're perennial.
Blanket flowers They didn't look so hot this year.
Turk's cap Transplanted from the alley entrance to underneath a camphor tree, this little plant has yet to take off and had only two flowers.

Things I can eat.

Jalapeño peppers Since I didn't do much with veggies this year, it was pretty easy to win: grow on your own without much involvement. Peppers will win every time.
Cilantro It was a prolific spring for the cilantro earlier this year.
Tuscan Blue Rosemary Current height: 2'2" (max: 4') Planted: 2011 November This still hasn't exploded like I expected it to. I suspect the camphor tree is inhibiting it somehow. It managed to grow 8" despite my clipping the tall bits for cooking.
Basil Reliably sprouted from last year's seeds.
Okra Not so good this year again. I wanted to grow enough to pickle, but the fruit were very sporadic. I will need to plant a lot more next year.