It's the end of the year and the growing season is over in south Louisiana, so it's again time for some sort of plant awards. I have just the thing: the 3rd Annual Growth Awards. It's plant versus plant in my yard. Plants try to outcompete each other by growing taller or having more impressive features than all the other plants in each of seven categories: Best Canopy Tree, Best Understory Tree, Best Shrub, Best Wildflower, Best Vegetable/Fruit, Best Vine, and Best Grass. New categories this year are Best Vine and Best Grass. Heights were measured on November 29, 2014, from trunk base to highest live leaf bud.

But first, I'd like to remember the plants that were taken from us before their time.

Yaupon Planted: (volunteer) While I was at work one day, the Department of Public Works came around and removed a stump from the back alley. This just so happened to be the stump where last year's Best Understory Tree winner was growing. They removed both the stump and the yaupon. There simply is no justice in the public right-of-way. It's a cruel world.
Silverbell Planted: 2012 August It was a case of the wrong tree planted in a demanding spot. The silverbell (Halesia diptera) had no chance in the full sun of the front yard. It succumbed very quickly, but I wasn't sure it was dead until this year's January when I tried transplanting it to a pot.
Scrub titi Planted: 2013 September Planted feet from the dying silverbell, this titi just needed more attention (i.e., water) than I was giving it. Sure, it could have taken drought eventually, but it was still only getting established. I only blame myself.
Sweet pepperbushes Planted: 2012 October These two plants (Clethra alnifolia "Ruby Spice") were purchased from an LSU Hilltop Arboretum plant sale. I can't explain what happened, but it's a tough location where they were planted: the north side of a two-story house, where it's full sun in summer and full shade in winter. It just seems as though they succumbed to root rot.

It's usually pretty slow and undramatic in the yard, but every now and then something happens that shakes the very foundation of everything I thought I could believe in.

Viburnum X Current height: 4'6" Planted: 2011 December I bought the tiniest of sticks from Arbor Day Foundation. It was labelled "Arrowwood Viburnum (Viburnum dentatum)". I immediately planted it. The first year, it grew to 1'10" and won the Best Short Tree category for 2012. By last year's awards, it was at 2'6", not enough to place well in the redefined Best Sbrub category. In spring 2013, I bought another arrowwood from Baton Rouge Green. It confused me why the leaves were so different between the two plants. In October, I decided to research the leaf shapes. Even though the plant has never flowered, I became convinced that what I thought was an arrowwood viburnum, a native, is actually a Japanese snowball (Viburnum plicatum), a non-native. For three years, I was nursing a plant that was switched at birth. I immediately bought another arrowwood viburnum from Baton Rouge Green so that they can produce berries for the birds. (Arbor Day has apologized and will be shipping a replacement stick.)

And now let the awards begin. 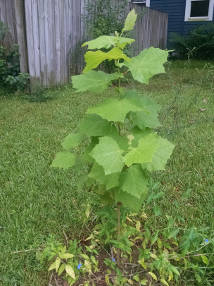 I acquired the seeds in January 2013 and planted them in March 2013. Some seeds escaped and sprouted in the garden. One individual I dug up (as bare roots) and potted in February 2014 and then planted in May. It grew 1'8" in 2013 and another 2'6" in 2014, making it the winner of the Best Canopy Tree award.
Baldcypress Current height: 3'6" (max: 80') Planted: 2013 March Last year's winner just didn't perform as mightily as this year's winner, but it still impressed, growing an additional 1'10", more than double its height a year ago.
Red maple, east Current height: 4'6" (max: 60') Planted: 2011 December The twin Arbor Day sticks may have a chance yet. The one that lost its main trunk last year grew a mighty shoot that is now taking over as the dominant. In one year, its height increased by 1'8", making it the tallest tree in this category.
Red maple, west Current height: 3'11" (max: 60') Planted: 2011 December This used to be the taller of the pair of maples, but it slowed down, only growing 6". 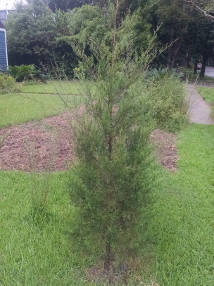 This one was recategorized this year from a canopy tree to an understory, which is much more appropriate given its habit. In 2014, it grew another 3'8", sending it into top place for Best Understory Tree.
Common hackberry Current height: 13'3" (max: 50') Planted: (volunteer marked off 2013 October) Though it grew an approximate 6'3" in 2014, this one didn't take the category simply because I'm not completely convinced it's what I think it is.
American hornbeam Current height: 10'8" (max: 40') Planted: 2013 October This guy grew 2'9" in 2014. When it starts branching out, it's going to get quite impressive with its fall color.
Eastern redbud Current height: 3' (max: 30') Planted: 2011 October The redbud is performing so much better in the shade of the live oak. It grew 1'5" in the past year, almost doubling its height
Carolina buckthorn, south Current height: 3'6" (max: 30') Planted: 2013 January It's now 1'2" taller than a year ago. Go team.

Not quite a tree due to their height. 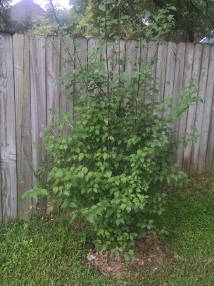 This is the legitimate arrowwood viburnum. The tallest part of the plant is now 4'1" higher than a year ago, making it this year's winner of Best Shrub.
Groundsel Current height: 4' (max: 12') Planted: 2014 May This one was originally growing in the back alley right up against the pavement. I moved it to a better spot where it could spread out without needing pruning. In the past year, it grew an estimated 3'6". It's definitely a female because it has white paintbrush-like flowers in fall.
Coralbean Current height: 3'1" (max: 6') Planted: 2014 March When I was gifted this plant, it was in a small pot and probably a few inches tall. In 8 months, it grew to 3'.
American beautyberry, east Current height: 6'6" (max: 6+') Planted: 2011 November This one grew as much in one year as last year's winner (1'8"), demonstrating just how competitive this category is.
American beautyberry, west Current height: 6'8" (max: 6+') Planted: 2011 November Last year's winner didn't do as well as its beautyberry peer, growing 6" shorter or 1'2" in one year.

Originally part of a "Butterfly Retreat" seed mix from Native American Seed, they reseeded and took off in 2014. Bumblebees and other native bees loved these guys.
Maximilian sunflower Planted: 2013 March (originally) Another excellent plant that grows tall and whose flowers insects love.
Plains coreopsis Planted: 2013 September This annual has many names: plains coreopsis, golden tickseed, and goldenwave. It took off in its first year in the rain garden.
Prairie verbena I'm not sure where these came from. It's either some seeds I acquired through the Capital Area Native Plant Society or Native American Seed's Butterfly Retreat seed mix. In any case, it takes the dry heat of the back alley like a champ.
Lanceleaf coreopsis Not only perennial but evergreen, these guys rock.

Things I can eat. 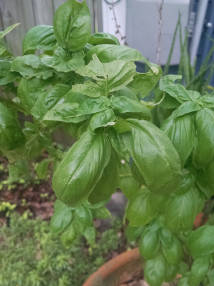 Somehow, this guy stayed alive through the winter of 2013-14. It grew wonderfully this year, and I used its leaves for a lot of meals.
Beans Planted: 2011 March (originally) The first bean came from a Whole Foods king cake. Each year since, I planted some beans, harvested them, ate most, and stored a few. Amazing how free food can be.
Tuscan Blue Rosemary Current height: 2'6" (max: 4') Planted: 2011 November This rosemary is still kicking. It isn't a giant bush like I was hoping, but it's still healthy.
Oregano I'm not sure when I got this plant, but it's been coming back year after year. I mainly use it for topping pizza.
Okra Okra makes the list just because I didn't focus on edibles this year. This okra volunteered itself and went to seed. I didn't harvest it because there were so few fruit and I figured I could use the seed for next season.

This is one of two new categories this year. I'm new to growing vines, so there aren't many nominees. 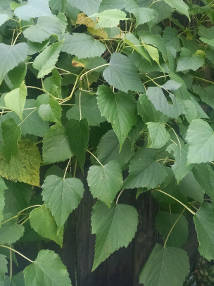 The grape volunteered its services in the back alley some time ago. I didn't realize what it was right away and was clipping it down. I now let it take over the fence, but I prune it to keep it in shape.
Virginia creeper There are multiple vines climbing the fences. They arrived uninvited, but I will gladly give them a home for as long as they want.
Maypop Planted: 2014 February This is my second attempt at growing a maypop. It's doing really well in the front yard and fed many Gulf fritillaries this year. It just hasn't had a good chance to grow up beyond a few feet because it got eaten up.

This final category is also new this year. Grasses are slow to establish, so not many were able to be nominated for 2014. 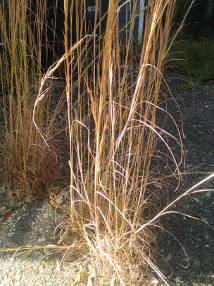 This grass came with the house. It grew without a worry in the world by the front sidewalk. I split it up and planted it around the yard. It did okay where I intentionally planted it, but it did even better in places where it grew from seed.
Inland seaoats Planted: 2013 January-May Most of what I have grew from seed that I sowed in January, March, and May 2013. This year, it went to seed. Another that is a transplant (from October 2013) didn't go to seed, oddly.

Now let's see how my last year's predictions for top performers did in 2014.

And one last thing before I close out this awards show, I'd like to predict five stars for 2015.