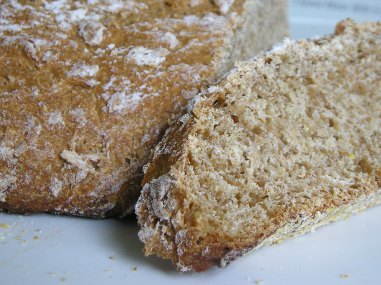 I was in a rush this past Sunday and needed to make bread that day instead if letting the dough sit in the fridge overnight. I played with my whole wheat and oatmeal bread again and tried some little changes.

Two hours to rise, shaped the dough and another 55 minutes to rise. Then baked it at 350°F for what may have been 45 minutes but should have been a little longer.

I don't know if it was the honey or the milk, but it's much less "whole wheaty" than any other whole wheat and oatmeal recipe I've done. I was going to do only 2 tbsp. of honey, but went for 3. Just to see. And the milk I put in because the dough was looking kind of dry and chunky. I wanted the dough to be a little wetter. Of course, a wetter dough doesn't rise as high, but it's definitely less dry (obviously).

Finally, it could probably have been in the oven for another 10 minutes or so. It was late and I wanted to get to bed, so I may have rushed it a bit. One thing about bread: you better be in the house and have some time to wait around.