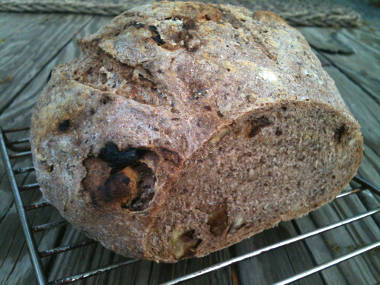 This is an alteration of my previous raisin bread. The difference is more cinnamon and replacing whole red wheat with whole white wheat and spelt. I hadn't intended on posting about this one until I ate a slice, so I don't have exact flour measurements available.

Oh, another difference is that I didn't let it rise overnight. I started it in the morning and baked at night.

I'm merely posting this so that I can remember next time what I did this time. Future self: maybe consider replacing some wheat with rice, barley, or potato flour. It might lighten up the thing, not that it's needed. Also maybe try that swirl thing: flatten the dough, add raisins and walnuts (and cinnamon?), then roll it up. And maybe see about adding a little more raisins as the cinnamon begins to taste bitter at this concentration.